Celebrating the Joy of Christmas amidst Adversities

Very early this morning, while it was still dark and cold, I celebrated the Misa de Gallo together with over three thousand parishioners/church-goers. Not all could be accomodated inside the church, others were contented to watch on a large screen the proceedings inside. The theme for this morning's mass was: "Working for justice - a concrete expression of loving God and Neighbor." Throughout the nine days of the novena-preparation, we have taken as the overall theme Benedict XVI's encyclical "Deus Caritas Est" (God is Love). So each morning our homilies touched on various aspects of this overall theme.

I am just amazed how we Filipinos can continue to celebrate the joy of Christmas amidst the adversities of life. Many of those who come to Church are not really well-off. There are many among them who come from the poor and depressed areas of our parish. Others may not be poor but they are suffering from illness, and some are going through grief and loneliness. Yet they fill the churches and celebrate with joy the birth of our Lord and Savior.

I myself know what it feels to celebrate Christmas amidst adversities. Around this time 33 years ago, a the early years of Martial Law, I found myself locked in prison with other political detainees waging a hunger strike to protest the maltreatment of our fellow prisoners. Around this time 21 years ago, our family was in grief as we buried our mother who was brutally killed by a gang composed of off-duty military men.

Now we celebrate Christmas in a situation no better than before. Majority of our people are poor. The spiral of violence and death continues to escalate - with the continuing insurgency war, the political killings, and summary executions. We have a president who, in order to hold on to power, has lied and cheated and violated the civil and human rights of people , and attempted to change the constitution. The darkness that reigns under martial law continues even under this supposedly democratic republic.

Celebrating in the dark as the new day dawns is a beautiful symbol of Christmas. We celebrate the coming of the light that will defeat the power of darkness.
Posted by Fr. Picx at 11:17 PM No comments: 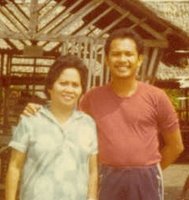 Today is the first day of the Misa de Gallo - Christmas is in the air! Amidst the joyful atmosphere, this day brings back sad memories. This was day the day my mother was killed 21 years ago - by a gang of holduppers whose members turned out to be military men.

To mark my mother's death anniversary, I went out for lunch in a Thai restaurant. I just imagined her presence while eating alone. I celebrated a memorial mass for her in the community chapel.

My mother, Nicole, would have been 80 years old today. She was just 59 when she was felled by a gunman's bullet after coming from the bank.

I wrote this poem during the wake:

Elegy for my Mother

My heart turned to stone
as I watched you gasped
for the last time
your eyes blank
and blood oozed from a hole
in your head made pointblank.
My eyes couldn't even shed a single tear.
Numb, numb, numb,
this was the only way
I could survive this madness.

What used to be
mere newsreports and statistics
have finally hit home.

"This is God's unscrutable will"
Some pious people consoled me.
"Praise the Lord!"

But I do not believe in a God
who can mastermind the murder
of a helpless mother.

What a blasphemy --
to make God the prime suspect
for the crime committed
by men who were supposed to maintain
peace and order.

This is the will of a rapacious regime
that has spawned an army
of thieves and murderers.

Mother,
I cannot imagine you now
as a mere pile of dust and bones
in a dark and lonely tomb.

I cannot regard you
as a mere memory.

Mother, I can neve believe
that a bullet could annihilate
everything that you have been
and will always be.
Posted by Fr. Picx at 9:08 PM No comments: