Conducting a Holy Retreat for Priests 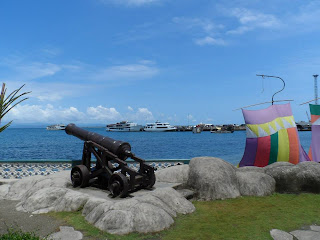 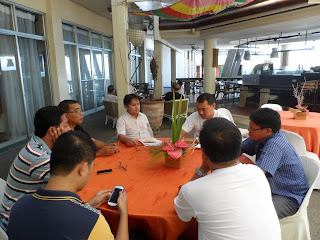 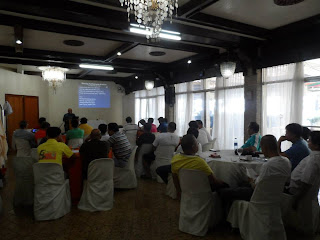 I arrived from Zamboanga the other day after conducting a retreat for 37 priests belonging to the diocese of Romblon. The retreat which was held at the seaside hotel of Lantaka near the old fort of Pilar started on Monday afternoon and ended Wednesday evening.

This is the seventh clergy retreat that I have given so far. I have given 3 retreats for priests from 3 Mindanao dioceses (Tandag, Pagadian, Dipolog), 1 Visayas diocese (Borongan) and 3 Luzon dioceses (Infanta, Baguio and Romblon).

As usual, the focus of the retreat was their life and ministry as priests with special emphasis on building and leading the parish as a network of Basic Ecclesial Communities. The framework that I used is based on the Vatican II and PCP II vision of the ordained ministry: the ministry of communion (koinonia) and pastoral leadership, the prophetic ministry, the liturgical/sacramental ministry and the social ministry. I also added the last topic: facing the darkside and the call to conversion.

Each session has a three-fold component: a) a talk/conference by the retreat director (that's my part), b) a period of individual reflection/meditation, c) a time for small group sharing (by vicariate). 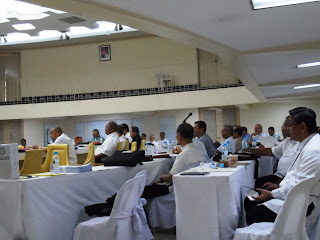 This has been a very busy week for me. The Catholic bishops of the Philippines gathered for their plenary assembly and I had to prepare and deliver orally the report of the Committee on Basic Ecclesial Communities to over 80 assembled bishops last Sunday. A couple of days before that, I also gave a short briefing to the Mindanao bishops who were having their meeting. Yesterday, I attended the lunch-meeting of the bishops who compose the Committee on BEC and this was followed by a meeting of the National BEC team. During the plenary assembly, I met Archbishop Palma who gave me a letter of invitation to be a guest speaker of the Visayas Regional Pastoral assembly which will be held in Cebu this coming October 2013. I also received invitation from the host of the Mindanao-Sulu Pastoral Conference to make a synthesis of the conference also during the last week of October.
This is the content of my report to the bishops:


The team monitored the progress of the implementation of the 2008 National BEC Assembly recommendations and plans which were crafted by the regions during the 2011 National Gathering of Diocesan BEC Directors.


1. National Capital Region Conference.  Delegates from 6 dioceses of the metropolitan province of Manila and the dioceses of Malolos and Antipolo gathered on September 29, Pasig to share their experiences on forming BECs in the urban areas - "BECs in the City." The executive secretary attended the event as  guest speaker. He also participated in the gathering.


2. Mindanao-wide BEC Gathering.  Delegates from 21 Arch/dioceses in Mindanao gathered in Tagum on November 20-23, 2012. Both the chairman and the executive secretary were present.  The sub-regions shared their experiences of forming and sustaining their BECs. The executive secretary gave a talk on the state of BECs in the Philippines, presenting it region by region and its challenges they are facing.


So far, 3 regions have already gathered: Northern Luzon (February 2012), National Capital Region (September 2012) and region (November 2012). We are still waiting for the other regions to implement their plans. The Southern Tagalog Region and the Bicol Region were planning to have their assemblies sometime in 2013. So far there is no given definite schedule. The Visayas region has scheduled a regional pastoral assembly in Cebu this coming October 2013.


The executive secretary was the guest speaker of the gathering of the following dioceses, districts and vicariates:


Collaboration with other CBCP Commissions


2. Upon the invitation of the executive secretary of the Episcopal Commission on Canon Law (Msgr. Tulabing), the CBCP-BEC Committee executive secretary attended the meeting of the ad hoc committee on BEC Guidelines of the Canon Law Society of the Philippines which was held in Cebu City on June 10, 2013. The final draft will be submitted to the CBCP for approval. The guidelines address the issue of the canonical status of BECs.  It also questions the so-called “sanctions-policy” adopted by some dioceses whereby active membership in BECs is a requirement for the reception of the sacraments (baptism, matrimony, funeral mass). Such policy is considered discriminatory and violates the rights of the faithful. This is the same position of the BEC office. Active membership in BECs should be the fruit of new evangelization and personal conversion, rather than a product of coercive policies. Perhaps what maybe helpful is a more systematic and effective program of new evangelization and catechesis. The guidelines on BECs from a canonical perspective can form part of a broader BEC guidelines which our office wishes to develop.


Collaboration with other Institutes


3.  The members of the national BEC team also collaborated with the Asian Social Institute (ASI) in their program of accompaniment for 5 dioceses in the Bicol Region. On March 18-21, 2013, Mgr. Manny Gabriel conducted a seminar on Pastoral Management to the diocesan pastoral workers, including priests and religious, coming from 5 dioceses in the region. On May 20-23, 2013, the executive secretary conducted a seminar-workshop to the same group on "BECs and New Evangelization."


Case Studies on BECs
The executive secretary and two staff members have started conducting case studies on specific BECs in some parishes of , , Cubao and . The following are the areas of interest: BECs and livelihood programs and their engagement with government agencies, BECs and Cooperatives, BECs in depressed areas, BECs in upper class areas (condominium and gated subdivisions), etc. We will expand the areas of coverage to the other parts of the country in the near future. Video-documentaries on exceptional BECs will be done later.
We are also gathering case studies and write-ups on BECs that have already been done by others. We are also encouraging dioceses to conduct their own studies and documentation on best practices in the formation of BECs. These studies will be made available in our office library and will be posted in the website (www.cbcpbec.com).


We are in the process of coming up with a national BEC profile and assessment. We have come up with questionnaires and tools of assessment which can be used by the dioceses and parishes. We have already sent the questionnaires to the diocesan BEC directors (or in-charge) for an initial diocesan BEC profile as part of the preparation for the National Gathering of Diocesan BEC directors and coordinators. A more detailed assessment can later be carried out. We hope that we will be able to come up with a data-base which can provide a more accurate picture of the BECs in the .


A National Gathering of Diocesan BEC Directors and Coordinators will be held this coming September 16-19, 2013, at the Holy Family Retreat House in Cebu City. Last May 2013, a communication was already sent to the bishops and to the diocesan BEC directors. For this gathering, we are inviting two delegates from each arch/diocese, namely the priest-in-charge/diocesan BEC director and a lay or religious BEC coordinator. The arch/dioceses are expected to shoulder the travel expenses as well as registration fee for board and lodging.  Please take note of the following:

Objectives of the gathering:


1. To review decisions made in October 2011 Gathering;
2. To update the participants of diocesan BEC profile;
3. To identify concerns, challenges and aspirations in view of their own experiences and in the light of New Evangelization;
4. And lastly, to brainstorm ideas in preparation for the BEC National Assembl,y slated sometime on 2015 in celebration of the 50th anniversary of Vatican II.


We continue to gather books and other resource materials on BECs, some of which are in our office book-shelves. They are also posted in our website. Books that are out of print will be scanned and stored as pdf file that can be downloaded.  We are also gathering and developing modules  and manuals on BECs, on new evangelization as well as related topics that can be used by BEC animators and formation teams. These will be posted in the website and will be published later.

Posted by Fr. Picx at 4:26 PM No comments: Links to this post