Davao to Iligan by Motorbike, Seeing the effects of Typhoon Sendong 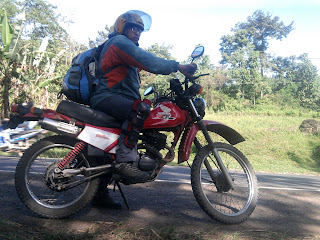 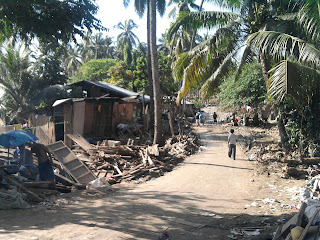 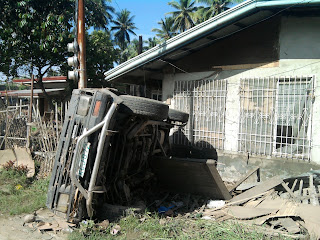 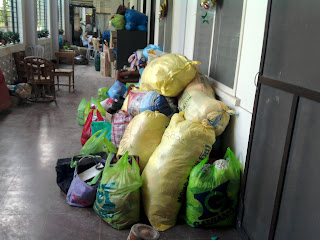 I arrived here in Iligan yesterday, on a motorbike (instead of the usual mountain bike) from Davao via the mountains of Davao and Bukidnon.

Upon crossing the new Hinaplanon bridge, I saw some of the devastation of the flashflood caused by Typhoon Sendong two weeks ago. Over a thousand people perished. Many of those who survived are now homeless.

Our monastery in Iligan was also hit by the flood but it was only knee deep. The computers, an LCD projector and the files have been destroyed. Major repairs need to be done on the ground floor of the monastery and the old novitiate building. Meanwhile, some members of the Redemptorist community are involved in relief operations. Some of the relief goods keep coming, and they have to be sent to the relief centers of the diocese and the city.

There are two families who are living at the second floor of the seminar house - they survived the flood but their homes have been destroyed. One of them is the family of Eugenio - our retired sacristan & driver. The other is the family of Dodoy - our former lay vocation promoter. Dodoy told me that a few minutes after they escaped to higher ground, the waters from the overflowing river reached the roof level of their house. His wife, Joy, said that the members of the neighborhood BEC cells survived because they urged one another that it was time to evacuate immediately.

Tonight, I will be celebrating the coming of the New Year tonight with my sisters and their families, thinking of those who will be greeting the New Year in the evacuation centers.
Posted by Fr. Picx at 12:11 PM No comments: Links to this post

Christmas 2011 in Davao: The Gift of a Piano 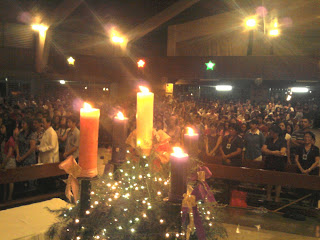 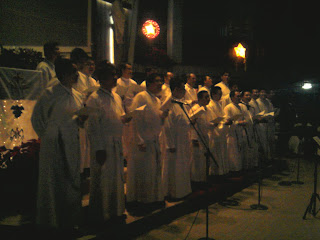 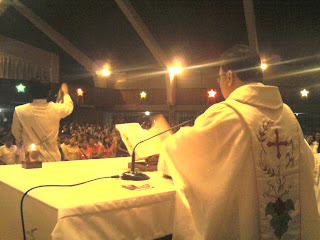 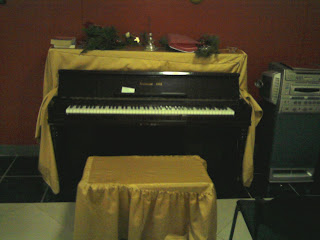 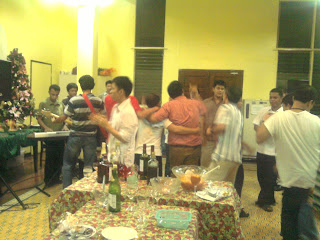 This is the 16th Christmas that I celebrated here in Davao (starting in 1995), but this time I celebrate it not as a member of the Redemptorist community but as a visitor or guest. Last night, I concelebrated at the 10 pm Christmas vigil mass presided by Fr. Mario Masangcay.

Tonight, we had our Christmas party with the senior Redemptorist community and the Redemptorist theology students. We had lechon, turkey and lots of drinks - wine, whisky, brandy, bailey, liquer, punch. With all these 'spirits' I recommended a "discernment" of "spirits". Everyone was in a jolly  mood after eating and drinking too much, and after receiving their gifts.

Tonight, I gave to the Redemptorist Formation Community a very expensive and valuable gift - the "certificate of ownership" of  the Weinstein piano. It's not really a new piano. I bought it 16 years ago after receiving a share of my inheritance from my late mother's estate. I was planning to bring the piano with me wherever I was assigned - and even bring it with me to my hermitage in Busay when I retire. After my death, the piano will be donated to the Davao Redemptorist Formation community. However, after I was assigned to the CBCP in Manila, and ran/walked across the Philippines to my new assignment, I thought it was too heavy to  bring with me. So, I decided to just give the piano as a gift to the community instead of making them wait for 30-40 years. So tonight during the Christmas party, I thought this was the opportune time to give it to them.

I still have a long journey ahead of me. A pilgrim has to travel light. I cannot bring the piano with me.
Posted by Fr. Picx at 11:28 PM No comments: Links to this post

Misa de Gallo at the Redemptorist Church in Davao 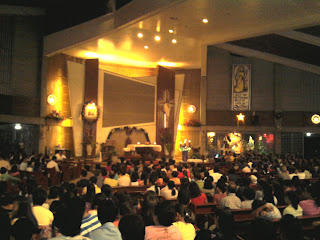 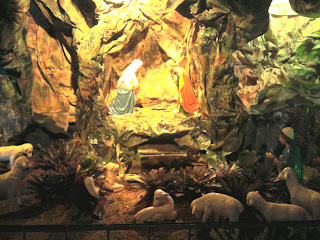 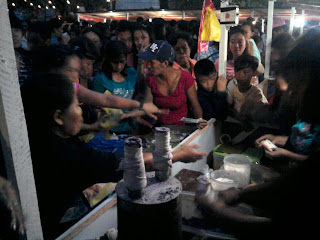 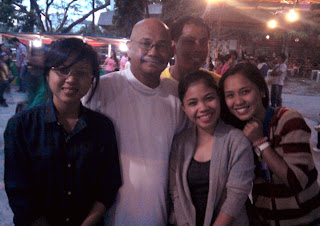 This morning at 4:30, I was the presider of the 8th day of  the Misa de Gallo - the traditional early dawn mass. . As early as 3:30 am, the church was already full and many had to stand outside, as far as the car park. There were many young people around. After the mass, many stayed around to partake of the delicacies - puto bumbong, tsokolate, etc.

I'm so glad to spend my Christmas here in Davao.
Posted by Fr. Picx at 7:28 PM No comments: Links to this post

Burial of My Cousin, Victim of Typhoon Sendong 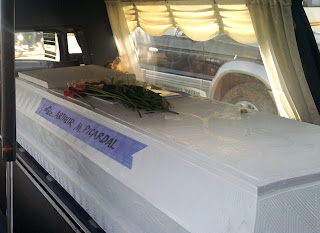 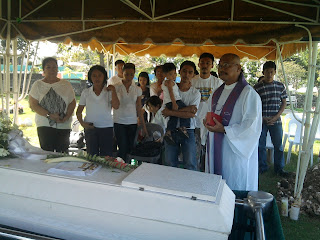 Last Sunday, I heard the news that Typhoon Sendong hit Cagayan and Iligan and caused a flash flood which resulted in the death of over a thousand people. Hundreds remain missing. Thousands of families were left homeless.  I was worried about my sisters, relatives, confreres and friends in Iligan. I was relieved to hear that they were safe although the flood was only knee deep in their houses. The Redemptorist church was also flooded so the Misa de Gallo was cancelled.  But the others who were living along the Mandolog river and Bayug island were not as fortunate.
Later that day, I got a call from my cousin Nene telling me that her younger brother - Arthur was one of those who perished in the flood in Cagayan de Oro. My cousin Arthur had a stroke several months ago and he was wheel-chair bound. So when the flood began to rise rapidly inside their house he panicked as the water rose to his neck level. His children rushed and tried to bring him up to the rooftop but it was too late, he was suffering from hypothermia and had a heart attack. He was only 53 years old. His family and relatives were distraught with grief. They were more fortunate than the entire families that perished and there was no one to claim their bodies or attend their burial.
I arrived in Cagayan last Tuesday evening and as I was walking on the bridge across the Cagayan river, I could smell the stench of death below me. The houses along the river bank below had been destroyed and there were still bodies under the debris.
When we arrived at chapel of the Greenhills memorial park, there was a funeral mass that was just finishing. We were able to celebrate the funeral mass for Arthur at 9:30 am and bury him by 10:15. We were told that almost every hour every day for the next few days until Christmas there will be burial - mostly victims of Typhoon Sendong. I heard that elsewhere unclaimed decomposing bodies  will be buried in mass graves.
I met my sisters and cousins from Iligan who came to attend the funeral and burial of Arthur. They told me about the devastation caused by the typhoon and the flood in our city. The most gruesome story was about the people who took refuge in the second floor of a big concrete house. They thought they were already safe but the water rose and a huge log from the river hit the house and killed all of them.
Apparently most of the water came from the mountains of Bukidnon and  Lanao del Sur. When the typhoon came, there were no more forest and watershed that could absorb the heavy rainfall. They have been replaced by pineapple plantations, farms, meadows for cattle, golf courses and housin subdivision. So the topsoil  and the water quickly came down to the cities of Cagayan and Iligan. Some of the illegally cut logs rushed down and hit so many people. What was surprising was that Northern Mindanao - including Cagayan and Iligan never experienced being hit by a typhoon before. Climate change.
Natural disasters are often called "Acts of God." This is a blasphemy! God is not responsible for Typhoon Sendong and the flashfloods that killed so many people and left many more homeless. This is the result of the greed of human beings and corporations who destroy the environment, who are responsible for the ecological imbalance. Mother nature does not forget. And that will not  be the last.
Almost 25 years ago, when we organized and mobilized the Basic Ecclesial Communities of San Fernando and the neighboring parishes to stop logging in Bukidnon we were aware that a total log ban and reforestation would benefit not only the villages of Bukidnon but also the coastal cities of Northern Mindanao. An ecologist from an NGO had informed us that without the forest, the coastal cities will someday be inundated by flashflood coming from the mountain ranges of Bukidnon and Lanao del Sur. The Aquino government declared a total log ban in Bukidnon in 1988, but that did not stop the logging especially in the ARMM - in Lanao del Sur. By then the whole of Bukidnon have become one large pinapple plantation, grasslands for cattle, and farms. The big capitalists, loggers and agribusiness have earned huge profits from destroying the environment. It is the ordinary people, especially the poor who pay for their sins. And they call this "act of God?"
Posted by Fr. Picx at 9:49 PM No comments: Links to this post

This message  is an invitation to attend a rally in the Supreme Court to support Chief Justice Renato Corona who has recently been impeached by the house of Representatives and will face trial in Senate next month. I presume this comes from the office of the SC spokesman Midas Marquez. This is probably the same text message that judges and court employees received, that is why there is a court holiday today.

Of course, no way will I attend the protest rally in the SC. CJ RENATO CORONA DOES NOT HAVE MY SUPPORT. I fully support the move to impeach him and oust him from his position as chief injustice. I hope he resigns rather than face humiliation and disgrace.

Renato Corona was the chief of staff, spokesman, executive secretary of Gloria Macapagal Arroyo - one of the most corrupt and abusive president we ever had - next to the dictator Ferdinand Marcos. His position made him an alter-ego of Gloria. It was on this basis that he was appointed associate justice of the Supreme Court and later Chief Justice of the Supreme Court a few days after the election of the new President Benigno Aquino III. This was clearly in violation against midnight appointment. This move has been interpreted as a way to protect the outgoing president GMA. He was appointed not because of his competence, probity and independence but because of his loyalty to Arroyo.

His decisions since then show a pattern of protecting his patronness. He and his 7 cohorts (the  so-called Arroyo court) has been an obstruction to justice - a hindrance to the reform agenda of the new government, blocking attempts at holding Gloria Macapagal Arroyo accountable for her crimes against the Filipino people. The recent SWS survey show that he is the least trusted among the high office holders of the land.

Through his spokesman, he has the gall to say that the impeachment proceeding is an attack against the judiciary and can lead to a constitutional crisis. I prefer to see this is an act of cleansing the judiciary and restoring its credibility. As of now,  Corona and his cohorts has the contempt of the majority of our people. For as long as Corona stay, the Supreme Court will remain a damaged institution. I hope that the impeachment will not stop with Corona - but will later include the other associate justices who are beholden to Arroyo and who have been corrupted.

There are some things that I don't agree with President Aquino and which I oppose - like his pro-RH stance and  his pro-mining policy. But  I fully support  his anti-corruption and reform agenda: starting with the campaign to make Gloria Arroyo and her minions (including Corona) accountable for their acts.

I don't believe that PNoy is an autocrat or a Fidel Castro. I wonder why those who say this did not say anything when Gloria Macapagal Arroyo acted like a corrupt autocrat and controlled the judiciary and congress.
Posted by Fr. Picx at 3:10 PM No comments: Links to this post