Conducting the Clergy Retreat of the Archdiocese of Manila 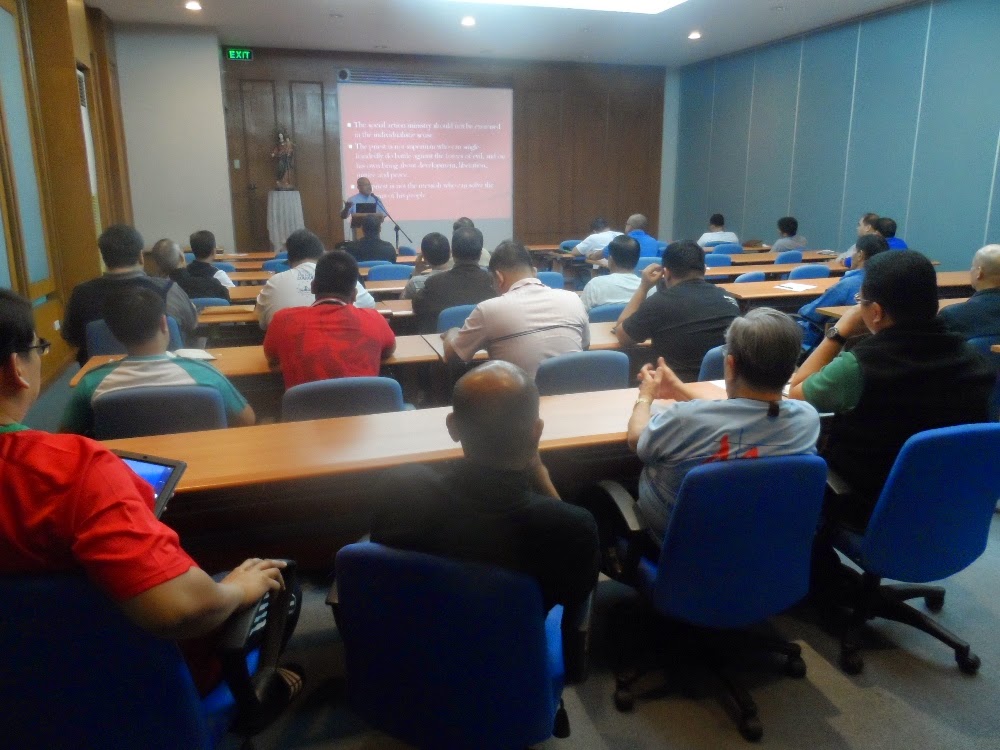 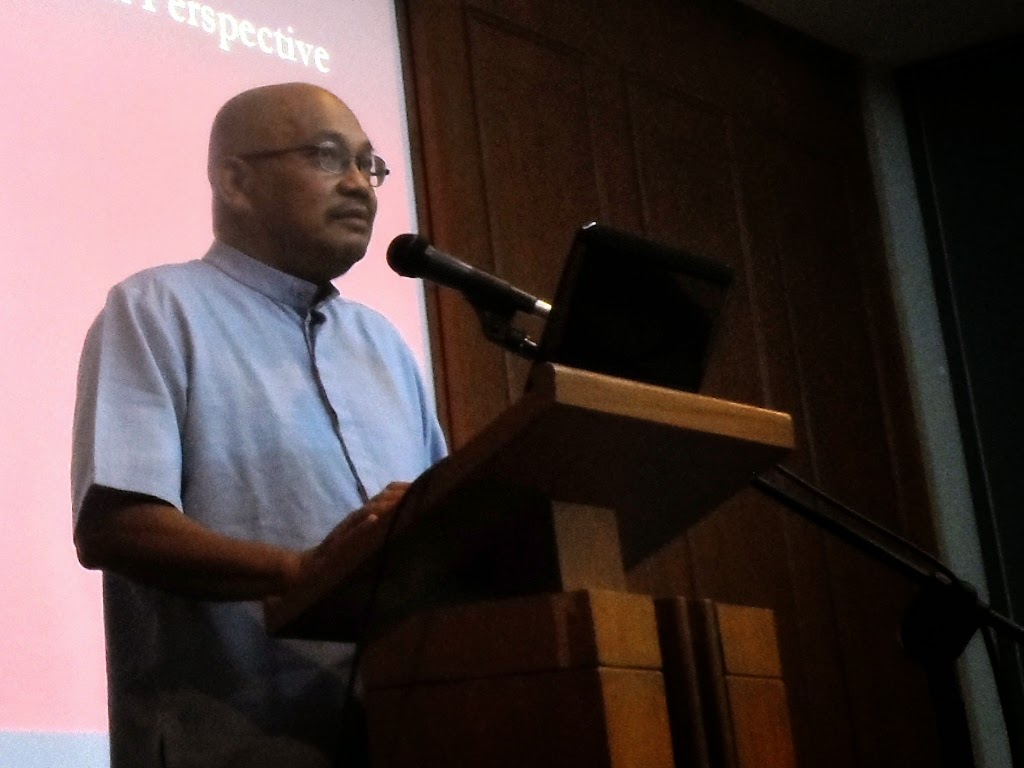 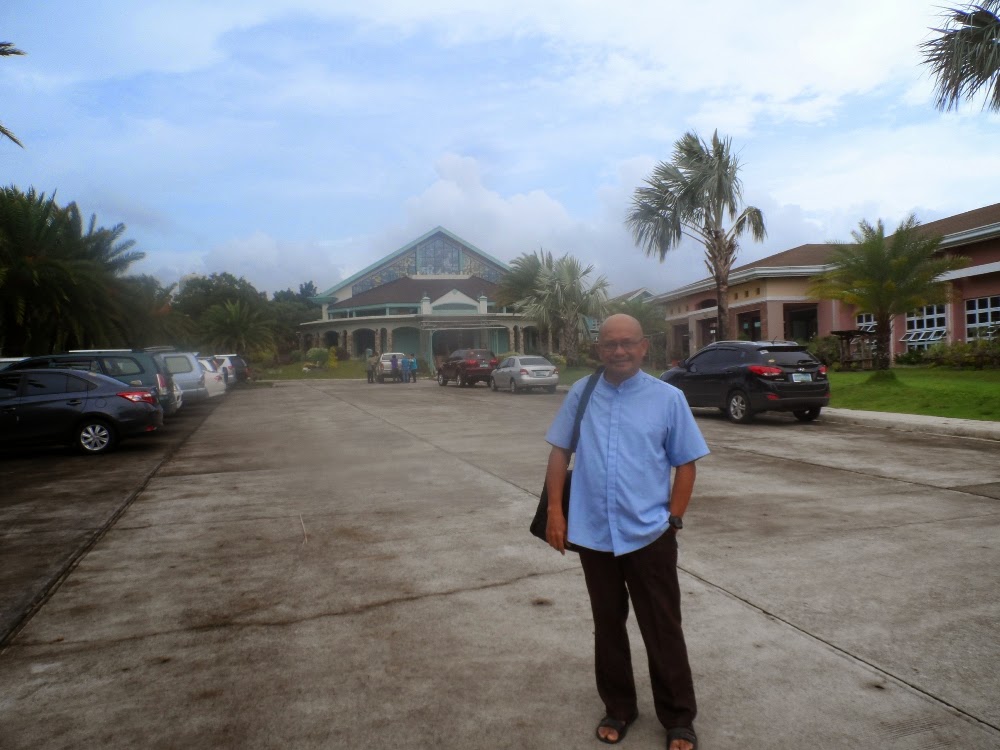 Several months ago, Cardinal Tagle asked me to conduct the annual preached retreat for his priests. Since the top priority of the archdiocese of Manila is the promotion and formation of Basic Ecclesial Communities, he saw it fit that I would be the one to facilitate the retreat.
So last week from July 21-25, the retreat was held in St. Paul Center of Renewal in Alfonso, Cavite. The theme of the retreat: "The Ordained Ministry vis-a-vis The BECs: A New Way of Being Priest for a New Way of Being Church." This was an opportunity for the clergy to reflect on their own life and ministry, based on the Vatican II and PCP II vision of the priesthood and on the priority of the Philippine Church, which is the formation of BECs.
This is the ninth retreat that I have given to priests so far. Last year, around this time, I was conducting the retreat for the clergy of Romblon. I expect to be giving more clergy retreat in the years to come. I feel happy and honored to be doing this. I am fulfilling my life's special mission: promoting the growth of BEC all over the country and at the same time, assisting in the renewal of the clergy. I am convinced that the renewal of the Church as promoted by Vatican II and PCP II can only become a reality with the spread of BECs and with the renewal of the clergy. This, I believe, is my contribution to the Church in the Philippines. This is what energizes me and what gives my life meaning and purpose. I don't mind doing this for the rest of my life - for as long as I am still physically and mentally fit to do this.

My Report to the 109th CBCP Plenary Assembly

Last Sunday (July 6), I gave an oral report to the bishops during their plenary assembly held at the Pius XII Center, Manila. Here's the text:

Meetings of CBCP-BEC Committee and National BEC Team
The Committee met on July 8, 2013 at the Pius XII center in Manila. This was attended by Bishop George Rimando, Bishop Julius Tonel, Bishop Gabriel Reyes, Bishop Jesse Mercado, Bishop Antonieto Cabajog, Bishop Pablo David and Fr. Amado L. Picardal, CSsR. The committee fixed the schedule of the regular meeting and also discussed the concerns and questions that need to be addressed by the committee.

National Gathering of Diocesan BEC Directors and Lay Coordinators
The most significant event during this period was the National Gathering of Diocesan BEC Directors and Lay Coordinators. This was held at the Holy Family on September 16-18, 2013. Some 129 diocesan BEC directors and coordinators coming from 64 dioceses  in the Philippines attended this gathering. The objectives of the gathering were the following:
The gathering started at 4:30 pm on September  16, 2013 with welcome remarks by Bishop George Rimando – the chairman of the CBCP-BEC Committee and overall facilitator of this event. This was followed by a roll call and the opening activity. At 5:15 pm Fr. Amado Picardal gave the background and orientation. At 6:15 pm – the opening liturgy facilitated by Mgr Joemarie Delgado and Dr. Estela Padilla. This was followed by dinner
The following morning at six, Archbishop Jose Palma presided at the opening Eucharist. He also gave the keynote message. After breakfast, there were two presentations: Fr. Picardal on “The National BEC Profile (8:30-9:30 am) and Mgr. Manny Gabriel on “New Evangelization and BECs” (10:30 – 11:30 am). During the open forum, Bishop Varquez of Borongan shared his own experience of BECs in his diocese. In the afternoon after lunch-break, the delegates were divided into small groups where they shared their own experiences of how BECs are becoming evangelized and evangelizing communities. This was followed by reporting in plenum. The day culminated with an evening liturgy followed by dinner and socials.
On September 18, the whole morning was spent in brainstorming and planning by regional groupings. There were two questions that the groups answered: (1) their expectations and suggestions for the 2015 BEC National Assembly (theme, process, resource persons, possible venue and dates), (2) how they can enhance their regional networking and cooperation. After lunch break, the delegates gathered for reporting in plenum. After the reporting, Archbishop Romulo Valles of Davao shared what happened during the Synod of Bishops which he attended and how BECs was discussed.  Before the end of the session, Fr. Carmelo Diola of Dilaab was given time to explain the printed material that he was giving to the delegates for the coming barangay elections. The closing Eucharist was presided by Archbishop Valles at 5:15 pm.

2. National Capital Region BEC Big Day, held on February 15, 2014 at the St. Paul University, Quezon City. This was attended by over  700 BEC formators and leaders from the archdiocese of Manila and the dioceses of Paranaque, Kalookan, Cubao, Pasig, Novaliches and Antipolo.

3. The Meeting of Diocesan BEC directors and coordinators of Central Visayas Region (from Cebu, Maasin, Dumaguete and Tagbilaran). The meeting was held on February 4, 2014 in Tagbilaran, Bohol.


The executive secretary was the guest speaker or resource person of the gathering of the following dioceses, districts and vicariates:

On December 4, 2013, the chairman sent Fr. Picardal to Cebu to attend the meeting of the Eastern Visayas bishops and the various international  Catholic relief services (CRS, Caritas International, etc). The meeting was organized by NASSA to coordinate relief and rehabilitation efforts in areas affected by Typhoon Yolanda.
After the meeting, Fr. Picardal came up with a concept paper "The Active Participation of BECs in Disaster Relief and Rehabilitation."  This was published in his column in CBCP Monitor. He also drafted a  bible-sharing method for the use of BECs in disaster affected areas which would help in psycho-spiritual integration and healing process of the people who have gone through traumatic experience and whose faith may have been shaken. This method, as well as the concept paper, was shared with the BEC directors of Palo, Naval, Calbayog and Borongan when he visited them before Christmas.  He also visited the resettlement areas of Typhoon Sendong victims in Iligan to conduct case studies on the efforts of the diocese to integrate the formation of BECs as part of the relief and rehabilitation process. Their experience would be valuable in coming up with best practices that would be helpful other disaster affected areas.
There are modules drafted by the CBCP-BEC office, which can be used in parishes and BECs affected by disasters. These modules can be helpful in the healing process, strengthening of their faith and enabling them to actively participate in the rebuilding and rehabilitation of their communities.

With the climate change and the prevalence of disasters that affect our country, including the BECs, there is a need to come up with protocols and manuals that can help BECs in disaster preparedness, relief and rehabilitation. On May 7-9, 2014, the executive secretary attended the executive course on disaster management held in Miriam College to get ideas for a disaster management manual for BECs.

Ongoing Projects
We continue conduct case studies on BECs in some urban areas (upper-class subdivision & condominium and urban poor communities).
Seminar-workshop modules for BECs are still being drafted and will be published next year.