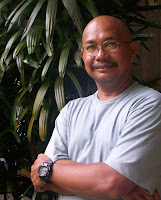 Hi! Let me introduce myself. I am Fr. Amado Picardal, a Filipino Catholic priest belonging to the Redemptorist congregation. Everyone calls me Fr. Picx. I was born in Iligan City in 1954. I am the eldest of 8 children (my parents didn't know about family planning, thank God).


I studied AB Philosophy at the University of San Carlos in Cebu from 1971 to 1975 and was involved in student activism. I was arrested, tortured and imprisoned for seven months  a year after Ferdinand Marcos declared Martial Law in 1972. After finishing college, I lived among the poor for six months in a slums area in Cebu and was trained as community organizer. I became a Redemptorist in 1977 and was ordained priest in 1981 after finishing my theological studies at the St. Francis Regional Major Seminary.
For over eight years after ordination, I was a member of the Redemptorist mission team - which was composed of Redemptorist priests and brothers and also lay missionaries. We helped form and strengthen Basic Ecclesial Communities in different parishes and dioceses in Mindanao. My last mission assignment was in San Fernando, Bukidnon where I helped organize and mobilize the communities against the logging companies in 1987-1988. As a result of our efforts, the government imposed a total log ban in the province since 1989.

From May 1995 to March 2011, I  was based  in Davao, as professor and dean of academic studies at the St. Alphonsus' Theologate (later renamed St. Alphonsus' Theological & Mission Institute). This is a school of theology for Redemptorists in the Philippines, Thailand, Malaysia, Singapore, Shri Lanka, Vietnam and Indonesia and also for other religious communities in Davao. Besides teaching, I was involved through the years in pastoral ministry as parochial vicar and acting parish priest. I have also gone around the country giving talks on Basic Ecclesial Communities to various dioceses and groups and conducting retreats for clergy and religious. I was involved in Christian-Muslim dialogue and in peace advocacy. I was part of the council of leaders of the Coalition Against Summary Execution that monitored and spoke out against the Davao Death Squads which many believed was inspired and supported by Mayor Duterte.
I am also known as the cycling priest of the Philippines. In 2000, I biked for peace across the country (from Davao to Ilocos Norte) covering 2,083 km. I also organized an annual bike for peace in Davao during the Mindanao Week of Peace. I biked around Israel in 2005 during my sabbatical. During the summer of 2006, I biked for life and peace around Mindanao for 3 weeks accompanied part of the way by some priests and a bishop. In 2008, I biked around the Philippines (Davao to Aparri and back to Davao) covering in over 5000 km in 56 days.

In 2009, I made a marathon comeback after a lay off of 14 years. I ran/walked across Mindanao during the Holy Week 2010, covering almost 400 km in 9 days. In July-August 2010, I ran/walked barefoot on the Camino de Santiago, from the French Pyrenees across the North of Spain up Santiago de Compostela, covering around 800 km in 27 days. In April to May 2011, I ran/walked across the Philippines covering 2060 km in 57 days. On December 2014, I did a climate bicycle ride from Manila to Tacloban, Davao, Cagayan and Iligan in 14 days covering over 1,800 km.

I write poetry. I also like to play the piano (which I studied for 5 years), flute, violin, guitar and harmonica (mostly self-taught). I have composed some songs for liturgy and evangelization seminars. I am a mountain climber - I have climbed Mt. Apo seven times. I also go scuba diving occasionally.

I am an aspiring theologian. I would like to come up with a theology from the grassroots, a theology that is inculturated and contextual, a theology that is not just discursive but also narrative and poetic. I am a member of the DaKaTeo - The Catholic Theological Society of the Philippines. I have written several books and articles on Basic Ecclesial Communities.
Since June 2011, I have been working full-time as executive secretary of the Episcopal Committee on Basic Ecclesial Communities (BECs) of the Catholic Bishops' Conference of the Philippines (CBCP). My office is in the CBCP building in Intramuros, Manila. I live at the Redemptorist Baclaran and help out in celebrating masses at the Shrine of our Mother of Perpetual Help on Wednesdays and Sundays. I also conduct clergy retreats.
I am now a senior citizen and I look forward to the next phase of my life (the last phase) living as a hermit in the mountain of Busay.