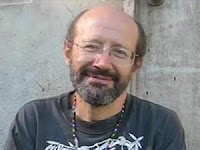 Fr. Fausto Tentorio, PIME was buried in Kidapawan today, beside the grave of Fr. Tulio Favale who was also murdered 25 years ago.

I regret I could not be at his funeral. Manila is so far away from Kidapawan. However, my confreres Frs. Romeo Obach and Frank Tobin of the Davao Redemptorist community represented the Redemptorists.

Like many, the news of Fausto's death deeply saddened and shocked me. I first met him when I was assigned in Arakan Valley in 1986. I was a member of the Redemptorist Mission Team and we were invited to conduct missions in his parish - the Mother of Perpetual Help parish. We helped in revitalizing the Basic Ecclesial Communities (BECs) that were weakened due to the militarization. It was a period of euphoria - Marcos had been toppled by People Power and democracy was restored. Yet, we were still in grief over the death of Fr. Tulio Favale who was murdered by paramilitary group led by the Manero brothers. I thought that with the end of the Marcos dictatorship, it won't be necessary for a priest to die a martyr's death.

I was wrong. Last week Fr. Fausto was gunned down as he was about to leave the rectory to attend the monthly meeting in Kidapawan. The assassin shot him point-blank and fled on a motorcycle with another man. As of now nobody knows who killed him or who ordered his death or why he was targetted. The way he was killed reminds me of the modus-operandi of the DDS (Davao Death Squad). Last year, I received information that some of the hitmen of the DDS were moonlighting as hired assassins.

There are a lot of speculations. He was active in the defense of the Lumad - the Indigenous Peoples who were fighting for their rights. He opposed the entry of mining companies in the area. He was very critical of the military operations in Arakan Valley.

His life had been threatened before. He knew it was not safe to continue his missionary work in Arakan. Yet he would not abandon his people. He took the risk and took up his cross. He did not run away and faced death - like  Jesus, the Good Shepherd.

Ciao, Fausto. Addio e ci vediamo. Go in peace. I pray that truth and justice will eventually prevail.
Posted by Fr. Picx at 11:54 PM No comments: Links to this post 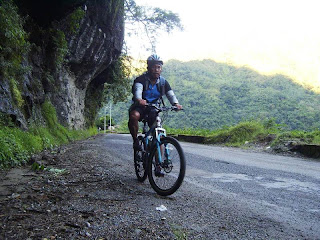 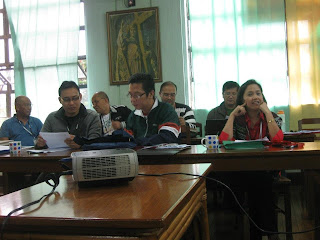 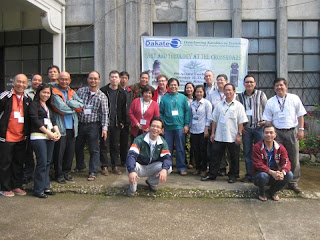 The Annual Conference of Dakateo (Catholic Theological Society of the Philippines) was held in Baguio from Friday to Sunday (October 21-23). Instead of taking the bus, I decided to bike to Baguio - that's over 260 km from Baclaran. I was planning to leave at one in the morning of Thursday hoping to reach Baguio before nightfall. But it was already almost three when I departed. I was biking at an easy, slow pace with a heavy backpack. I got a flat tire at 3 pm while in Villasis, Pangasinan. It took some time to change the interior and then had the punctured tube-tire vulcanized. By 4 pm there was a heavy downpour, but I continued biking until I reached Binalonan - 206 km from Baclaran. It was already 5 pm and I still had over 60 km of biking - mostly uphill. I felt it would be foolhardy to proceed in the dark and rain after biking over 200 km. I decided to just stay overnight in the parish of Binalonan. I knew the priests - Fr. Catungal and Fr. Cirilo - since this is where I stayed overnight during my run-walk across the Philippines. So, they put me up for the night after a heavy meal.

I continued biking very early in the morning and after 6 hours of exhausting ascent, I finally reached the Little Flower Retreat House in Baguio where the conference was held.
The theme of the conference for this year is: "Art and Theology at the Crossroad." Last year I was just a guest who presented a paper on "BECs and Environmental Praxis" in the annual conference held in Davao. This time, I was formally accepted as a member of the Dakateo - the Catholic Theological Society of the Philippines. This is an exclusive society of Catholic theologians in the Philippines - mostly professors in various theological schools in the country with doctorates in theology from Louvain, Fordham (USA), Gregorian (Rome) and also from the Philippines.
I came back to Baclaran yesterday afternoon, this time taking the bus. There was enough space for the bike in the baggage compartment.
Posted by Fr. Picx at 9:14 PM No comments: Links to this post 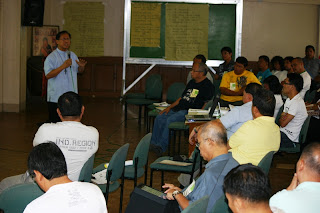 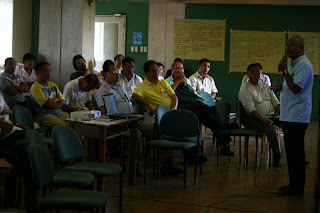 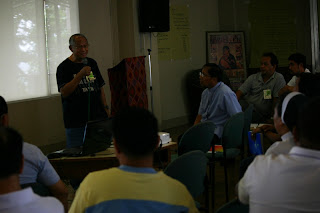 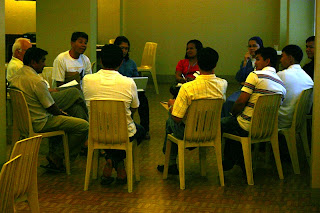 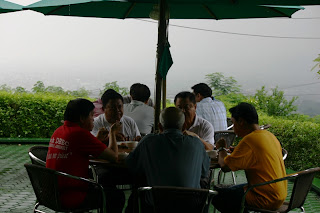 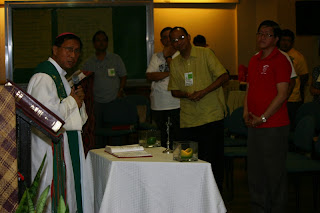 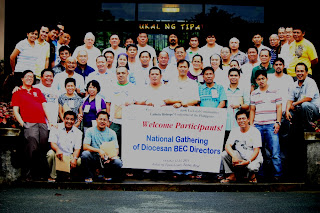 From October 11-13, 2011, directors/coordinators of Basic Ecclesial Communities coming from 57 dioceses all over the Philippines and gathered at the Bukal ng Tipan Center, in Maryhill, Taytay Rizal. the delegates from Surigao and Catarman failed to arrive due to Typhoon Ramon. The gathering was organized by the National BEC team of the CBCP-BEC committee composed Bishop George Rimando (chairman), the executive secretary (yours truly), the consultants (Mgr. Manny Gabriel, Mgr. Jomari Delgado and Dr. Estela Padilla). Bishop Broderick Pabillo (vice-chairman of CBCP-BEC Committee and chairman of Commission on Social Action, Justice and Peace) also attended together with 2 observes from the National Secretariat of Social Action. The Staff of Bukal ng Tipan (headed by Fr. Mark Lesage) acted as the secretariat and documentors of the gathering.

The purpose of this gathering was to establish contact between the CBCP-BEC national office and the diocesan BEC directors, come up with a general assessment of the BECs in the Philippines, develop regional networking/linkages and plan for the regional BEC assemblies starting 2012. This was also an opportunity to explain the role of the CBCP-BEC Committee and the National BEC team. I also introduced our new website (the Cyber-Office) which will function as a means of means of inter-connection, communication and exchange.
The whole gathering went very well and I was amazed at the commitment and enthusiasm of the delegates. I will be very busy in the coming months and years, following them up, helping in the preparation and facilitation of the regional gathering all over the country.
Posted by Fr. Picx at 11:30 PM No comments: Links to this post