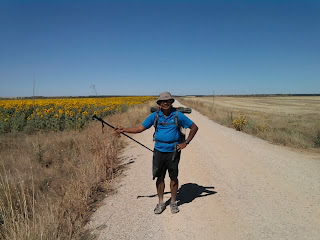 Yesterday, I hiked 37 km from El Burgo de Ranero to Leon. This is the longest distance that I have hiked since I started the Camino. I did the whole distance wearing my sandals so I was able to do it more quickly. While walking alone I reflected on my own life's journey focusing on the last 10 years.
I reached the Albergue in Leon by 3:30 pm and was able to get plenty of rest. I was able to meet some pilgrims whom I befriended the last two weeks. I joined some the pilgrims for dinner at a restaurant and we shared our experiences. After the evening prayer with the Benedictine sisters I sat near the garden drinking hot chocolate. A young Spanish woman who heard I am a priest approached me and asked me to hear her confession. I gladly said yes.
I started walking barefoot at 6:15 and after almost 5 hours the road became hotter and harsh so I finally wore my sandals. I was able to cover 27 km. I am now in Martin del Campo.

While hiking I sang the song I composed yesterday:

We are pilgrims on a journey
Across the mountains & plains of Spain
We're on our way to Santiago
To the field of stars.

Chorus:
Ultreia, onward do we go
Ultreia, to the tomb of St. James

We're hiking across the Pyrenees,
The mesetas and Galicia.
We do not mind the cold & the heat,
The blisters & the muscle pains.

Chorus:
Ultreia, onward do we go
Ulreia, to the city of St. James

As we make our own Camino
We are not all alone
We meet friends & companions
On the road & the albergues.

Chorus:
Ultreia, onward as we go.
Ultreia, to our final destiny.

We are pilgrims on a journey
Within our mind, heart & soul.
And we grow in the Spirit
In faith, hope & love.

Chorus:
Ultreia, onward as we go.
Ultreia, to our final destiny.

We are pilgrims in life`s journey

to our final destiny

to the home of our Father,

his Son and the Holy Spirit.

Ultreia, onward do we go

Ultreia, to our final destiny 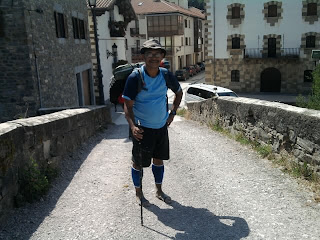 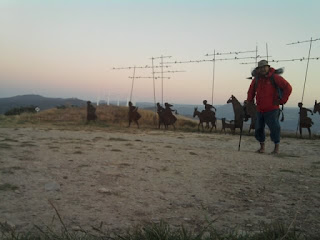 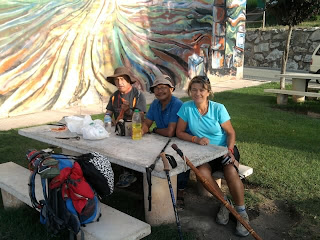 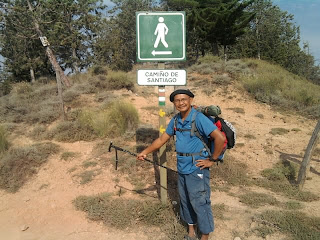 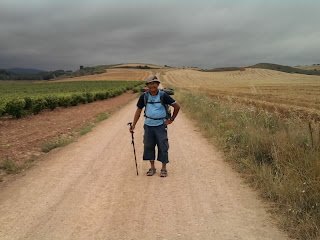 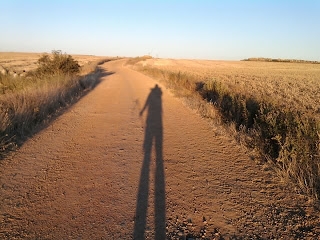 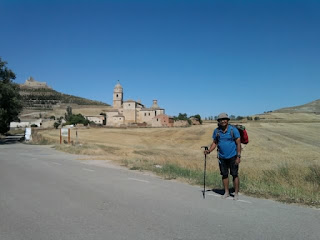 Two weeks ago, I started my running/hiking pilgrimage to Santiago de Compostela starting in St. Jean Pied the Port at the foothills of the Pyrenees mountains. The day before, I had took the train from Madrid to Lourdes, France and after spending the night there proceeded to St. Jean.
The first two and a hal-days went very well. I was able to run/hike barefoot across the Pyrenees mountains and the Navarra region, up to Pamplona. The first day as easy due to a lot of grassy surface and and soft forest path. It was also cold up in the mountains. The second day was more agonizing due to the harsh gravel paths. The third day, I was able to hike barefoot up to Pamplona, but in the afternoon the road became too harsh and hot that I had to use my sandals for the first time.
Since the fourth day up to the present, I have done more hiking than running, and less barefoot trekking due to the heat and harsh road conditions. I have to use my sandals more often especially in the afternoons and also when confronted by long stretch of sharp gravel that would hurt my feet. For several days, I have been suffering from a swollen right ankle due to a sprain while running with my sandals. The only way to alleviate the pain is to hike barefoot. So these days I try to do more barefoot hiking, up to four to five hours in the morning before the summer heat is felt.
So far, I have been averaging 30 km per day. Today, I have done around 420 km since I started, more than half the length of the Camino.
The last two weeks on the road has been a time of solitude, prayer and reflection. It is indeed a retreat on foot. It is time of soul-searching, going over my life´s journey, and discerning God´s will for the years to come.
It has also been a time of experiencing friendship and community among other pilgrims, especially in the Albergues at night. I have also been able to celebrate the Eucharist and to listen to other pilgrims share their stories. I have also heard confession and gone to confession (to a fellow pilgrim-priest from Ireland.
Through out the past two weeks I have become acutely aware of the following:
1. My dependence on God´s providence and the kindness of others
2. My own limitations and weaknesses
3. The need to be more flexible, and not to rigidly hold on to my own plans and wants
4. The need to slow down, not to race, because life is not a race but a journey. The slower and relax I am, the more distance I can cover in one day.
5. The presence of God in the beauty I see around me and in other pilgrims I encounter on the way.
I still have 13 more days to go before I reach Santiago de Compostela. I am still at the Meseta - the hottest region in Spain. I hope that by the time I reach the mountains and Galician region where it is cooler, I can do more barefoot trekking. I am planning to do the last stage from Sarria to Santiago totally barefoot. Thus, I have reduced the average distance for those days to 24 km/day.
I continue to remember my loved ones, relatives, friends and confreres in my prayer. I pray and hope that I will reach my destination safely. 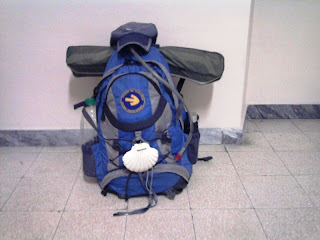 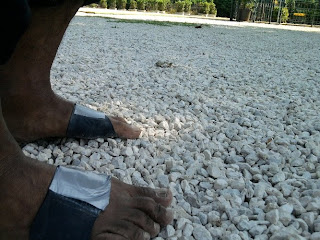 This morning, the summer course on Ecumenism and Interreligious Dialogue finally ended here in Rome. Tomorrow, I fly to Madrid for my pilgrimage to Santiago de Compostela. I will spend a couple of days in Madrid and then take the train to Bayonne, France. I will make a side trip to Lourdes and from there go to St. Jean Pied de Port where I will begin my running/walking pilgrimage on the Camino de Santiago. As much as possible, I will cover the 800 km route barefoot like St. Francis and many medieval pilgrims. However, I have a lot of doubts if I can really do it. So, I will wear my sandals when the road gets too harsh or hot. I will be doing some running and also lots of walking breaks. The primary goal is reaching my destination on foot in 26 days and at the same time journeying inward. It will be a mobile spiritual retreat, involving meditation, reflection and prayer. It will also be accompanied by penitential acts (barefoot walking/running and fasting during the day, sleeping under the stars at night most of the time).
-
During the pilgrimage I will be praying for the following intentions:
(1) for healing - of several friends with cancer and for my own complete healing (hypertension, myocardial ischemia and atherosclerosis)
(2) for a deeper experience and awareness of God's presence in my life, stronger faith and ongoing personal conversion, and discovering God's will for me in the coming years.
(3) for peace in the Philippines (especially Mindanao), and that a final peace agreement will be reached between the Government and the MILF (Moro Islamic Liberation Front), and the Government and the NDF (National Democratic Front).
(4) for the new administration of President Noynoy Aquino - that he will be able to lead the Filipino people in transforming Philippine society, get rid of corruption, bring about peace, justice and progress.
-
I am aware that this pilgrimage will be a time of grace. I rely on God's providence and the kindness of the strangers I will meet on the way.
-
This is my planned itinerary:
El Camino de Santiago de Compostela: Itinerary
(July 16, 2010 – Aug 10, 2010)

Hiking in Ostia Antica and Back to Rome . The Second Journey 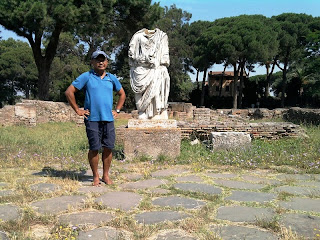 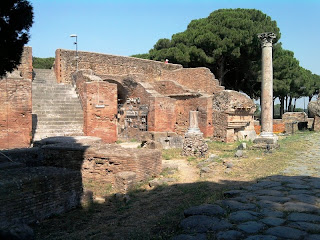 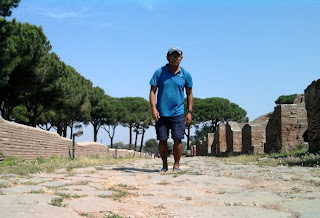 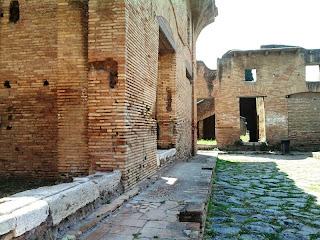 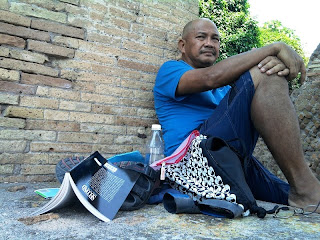 The second week of summer course on Ecumenical and Interreligious Dialogue ended last Friday. We have discussed so far the Vatican II documents of Ecumenism and the Catholic Church's dialogue with various Christian churches and ecclesial communities (Orthodox Churches, Anglican communion, Lutherans, and Pentecostal Movements, etc).
.
Yesterday was a free day so I decided to explore Ostia Antica - the ruins of an ancient Roman village at the mouth of the Tiber river. Originally, I was planning to hike there from Rome and take the train coming back. But I woke up late so I took the train going there and hiked back to Rome.
.
I reached Ostia Antica just before ten and explored the ancient village for more than two hours barefoot. I found it easy to walk barefoot on the ancient cobblestones and dirt road even as the temperature rose to 32 degrees celsius. I decided to rest by midday and ate the sandwich I brought. It was very quiet, there were very few tourists.
.
I was alone by myself and sat under a shade for over an hour meditating and reading a book I brought with me - "The Second Journey" written by Gerald O'Collins, SJ (my professor at the Gregorian University in Rome 17 years ago). He writes about the three journeys that we usually undertake in our life - the first journey (at the morning of our life -from childhood to adulthood), the second journey (at the noontime and afternoon of our life - midlife), the third journey (the evening of our life --old age).
.
O'Collins writes that the second journey may be undertaken by those who are 35-40 years old, while some do it later - when they are in their mid-50s or even as late as the 60s. The second journey is primarily an inner journey, but at times it is also accompanied by an outer journey: "It is the inner component which brings about a second journey. The external traveling has only a subordinate function. All the same, the shift from place to place appears to be a steady feature of authentic midlife journeys."
.
He further observes that the second journey involves the search for new meanings, fresh values and different goals. Persons on the second journey want more out of life.
O'Collins also writes that "people on second journeys repeatedly betray a deep sense of loneliness. This loneliness should eventually turn into the aloneness of a quiet and integrated self-possession. But before that happens, they will find themselves in Dante's "dark wood."
.
According to O'Collins the journey terminates with the arrival of new wisdom of a true adult.
"It is a wisdom of one who has regained equilibrium, stabilized and found fresh purposes and new dreams. It is the wisdom that gives some things up, let somethings die and accept human limitations. It is the wisdom that agrees, 'I cannot expect anyone to understand me fully.' It is the wisdom that has learned through suffering to live with human finitude and admit the inevitability of old age and death."
.
O'Collins uses the "pilgrimage" as the metaphor for the second journey. He writes that the second journeys end in two ways.
(1) the pilgrims reach a new place and a fresh commitment
(2) or else they return to their original place and commitment, only to reaffirm them in a new way.
.
For O'Collins, prayer is an essential component of this journey: "Those persons whose lives have been consciously touched by God will not readily come to journey's end without prayer. Only that can turn such persons from being mere vagrants into becoming genuine pilgrims. Nothing less than the deep experience of God can ensure that their second journey will lead somewhere in the end. It takes faithful praying to transform incoherent wanderings into a genuine midlife journey."
.
I was deeply touched, reading these lines. It seems to describe where I am now. As I make my pilgrimage in Rome, in Lourdes and on the Camino de Santiago, I have become more aware of the second journey that I am undertaking.
.
At 2 o'clock in the afternoon, after this period of rest, meditation and spiritual reading, I hiked 30 km back to Rome - along the via Ostiense. I reached our place after eight in the evening.
Posted by Fr. Picx at 5:19 AM 1 comment: